Kidcos like Funko and Toy Mint are getting into non-fungible tokens just as the blockchain tech is starting to gain attention. That growing interest could be good news for companies looking to make some futuristic cash, opening up new revenue streams and giving consumers a new way to buy merch.

Non-fungible tokens or NFTs are unique pieces of content—think of it like a one-of-a-kind virtual trading card—which are transformed into a digital unit with ownership details stored on a digital ledger (a blockchain). NFTs are basically a digital receipt of authenticity, which differentiates the content they’ve bought from copies that may exist elsewhere on the internet.

NFTs have been around for since 2012, but in 2020 their market value tripled, reaching US$250 million. The interest is due to some big items coming up for sale—such as the original viral video Charlie Bit My Finger. (The family behind the original viral video will transfer its ownership to the winning bid, deleting their copies. While copies will still exist elsewhere on the internet, the “original” will be in the hands of a new owner.)

Gamers have already been embracing blockchain, with 44% saying they’ve used the tech to purchase or trade items from their games, according to 2021 data from Statista. But NFTs and blockchain are still far from being mainstream among consumers. A 2020 survey from Crypto found just 47% had even heard of NFTs, and of those who had, just 63% had a basic understanding of what it actually was.

NFTs can benefit any kids content creator looking to expand their revenue streams beyond traditional publishing platforms like YouTube and Amazon, says Boscovic. It’s particularly fitting for toycos who can use NFTs to sell new digital merch—anything from art to toys—creating a new type of unique virtual content for kids.

Earlier this month, Vancouver-based toy startup Toy Mint launched its first line of IRL toys (pictured, top), which includes plush bears, and which can only be bought if families purchase a matching virtual NFT on the cryptocurrency exchange platform OpenSea. The toyco is taking this approach to give kids simple and unique toys, according to a release from the toyco.

Funko, meanwhile, jumped into the market last month, acquiring a majority stake in TokenWave, which developed TokenHead, an app that tracks and displays NFTs. Funko acquired the techco to expand its collectible business into digital assets, according to the company. The toyco will launch its first NFT offerings in June, rolling out new properties on a weekly basis through the blockchain platform WAX. 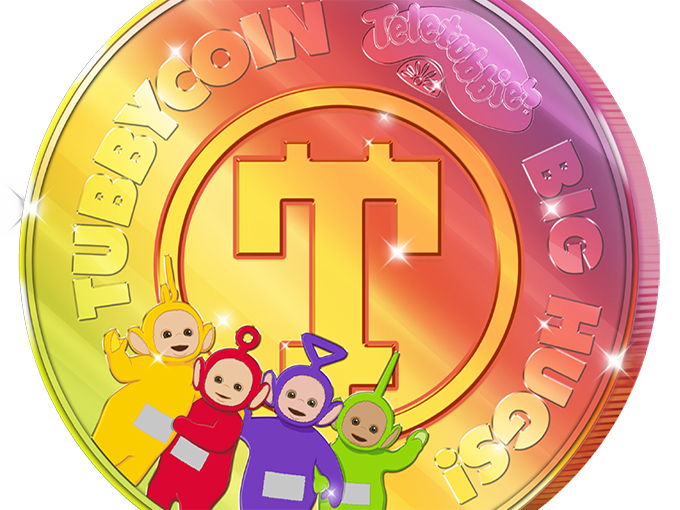 WildBrain auctioned off one Teletubbies-themed NFT, which it called a TubbyCoin.

In a one-off experiment, Toronto-based WildBrain sold a one-of-a-kind Teletubbies-themed coin as an NFT, which raked in a few thousand dollars, a WildBrain spokesperson told Kidscreen. While this was a new way to raise money for a charity project, the company doesn’t have any plans to expand into NFTs, the spokesperson said.

Though NFTs might be a good place to experiment with new virtual merchandize and collectibles, there are other reasons for kidcos to keep an eye on the category. The digital nature of NFTs gives people around the globe the ability to create digital tokens out of other people’s IP.  While copyright and IP laws protect creators from this, it’s still a concern in the art industry where people have tried to sell content that doesn’t belong to them.

There also remains concerns about the bubble-like nature of the technology. Whether or not the current hype over virtual tokens can be sustained is still in question, and means companies should think carefully if they want to get into the mix, says Boscovic.

Hero Arena, NFTs Game World with over 20,000 heroes will officially IGO on Seedify and IEO on Gate.io By BTC Peers

Hero Arena, NFTs Game World with over 20,000 heroes will officially IGO on Seedify and IEO on Gate.io By BTC Peers