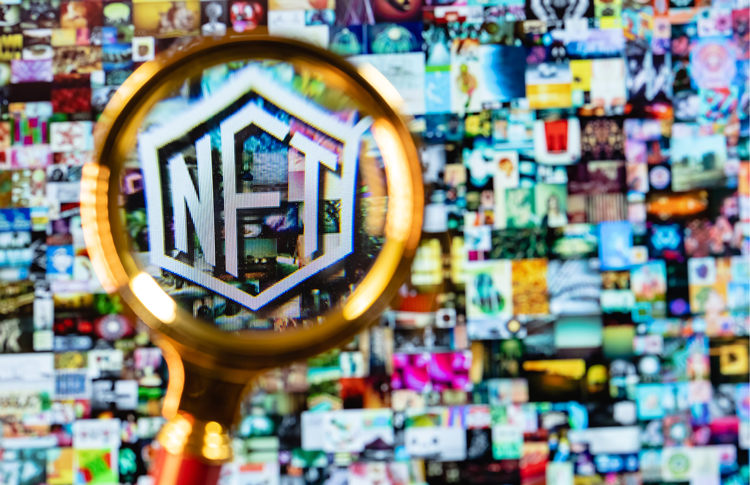 Non-fungible tokens (NFTs) have gone mainstream. Public figures from tennis star Naomi Osaka to TV legend William Shatner have gotten aboard the NFT train, creating unique digital assets for a hungry, hyped-up market. The NFT bubble is so big, it has even entered socialite and crypto-enthusiast Paris Hilton’s dreams, according to a recent interview.

But what are they? Simply put, NFTs are unique files that exist on blockchain and are usually bought with cryptocurrency or dollars. According to a Dapp Radar report, NFT market-places accounted for a combined trading volume of $342 million in the month of February alone.

They are particularly of interest to the art world because they can verify ownership and help to establish prove-nance. When digital artist Beeple sold an NFT artwork for $69 million at Christie’s in March, interest peaked. Now NFTs are creating new commercial avenues for digital creators. Pop star Grimes made $5.8 million in under 20 minutes selling her own NFTs in February, while the animated Nyan Cat meme sold for close to $600,000 the same month. There is real money to be made, but there’s also real risk, and that’s where the lawyers come in.

FOR LAWYERS, WHAT WORK DO NFTs GENERATE?

As with any new product, behind the hype lie ambiguities. Simon Hawkins, a Hong Kong-based partner at Latham & Watkins, says like with a lot of digital assets, it is unclear what legal issues may develop as a result of NFTs.

Lawyers would be involved in work related to structuring of the platform and ownership rights, where legal entities should be based, and IP rights, to name just a few.

“Then there’s this securities regulatory overlay, which is whether these NFTs, which are crypto assets, fall into any of these legal and regu-latory frameworks. This is one of those areas where NFT creatives in marketplaces need to exercise caution,” Hawkins says.

“There’s a lot of work associ-ated with the legal categorisation of a token, and if you get that wrong it can be pretty dire because most of these are dealing in regulated assets. If you don’t hold the neces-sary license, it’s typically a criminal offence in most jurisdictions,” Thiel says. As a result, NFTs are “quite a high-risk area of regulatory advice.”

While high risk regulatory advice may not traditionally fall under the remit of fintech lawyers, being able to break down the char-acteristics of a token, and give an assessments based on jurisdic-tion requires the ability to see the complete picture. For lawyers, this requires a nuanced understanding of the underlying technology, the token attributes, and the law in the relevant jurisdiction. “if you don’t have that total understanding its actually extremely difficult to be an effective adviser,” Thiel says.

WILL NFTs TAKE OFF IN ASIA?

The short answer for Hawkins and Thiel is “yes.”

While the U.S. has seen the bulk of interest, other countries are getting on the bandwagon too. In India, South Korea, Japan, and Hong Kong, the market is abuzz with new NFT entrants and chatter.

“The area where I’m seeing huge amounts of traction in Asia — and by huge amounts I mean billion-dollar businesses, already up and running – is in the area of gaming,” Thiel says. He points out the gaming industry has effectively been using NFTs “through things like micro in-game payments to acquire individual in-game assets or functionality, such as a new sword.”

Hawkins says Asia is a “natural market” for NFTs, as it has big digital eco-systems already in existence. The buyer of the Beeple artwork is Singapore-based, and some merchants in South Korea already accept cryptocurrency payment, he adds.

“Asia is a place where you would expect to see a big uptake in this sort of space,” Hawkins says.

While China may be viewed as a huge untapped market for oppor-tunity in terms of content creators and consumers, regulations suggest NFTs will struggle to take off.

As the NFT market develops, so will opportunities, as people build different business, products and services. “When we talk about NFTs, that’s actually an extremely broad term,” Hawkins says.

One interesting emerging trend is NFTs being used to prove owner-ship of physical assets. “It can be used in the same way, as when you buy a car and get your registration documents or buy a house and get a deed of ownership for a piece of land or property, or you buy a painting and get a certificate of authenticity which establishes provenance,” Hawkins says. “We’re starting to see people coming with ways of veri-fying ownership and provenance for physical items, that are using these non-fungible tokens because they’re better and more reliable source of ownership — in theory at least,” he adds.

Thiel says one area of interest which will spark legal challenges is token fractionalisation. For example, he points to the LeBron James dunking video clip NFT that sold recently for more than $200,000. “People assume ‘wouldn’t it be cool if we took the video clip and broke it up into 10 tokens or fractionalised our one token…but as soon as you break that up, there’s a very good chance that becomes a security or a regulated collective investment scheme — obviously it depends what market you’re in and various other things. It very quickly moves into the regulator’s space, and I think that’s a common misunder-standing,” he says.

In the future, Thiel says there will be work around the structuring of the tokenomics, and trying to “categorise the bundles of rights that are going in here.” While at the moment he says there’s “probably a fair bit of froth in the market,” when this subsides, “what is left is going to need to be well structured.”