Those lucky enough to be endowed with more money than brains finally have a new way of showing their good fortune to the world. Not only can they buy the Hispano Suiza Carmen, but they’ll also soon be able to bid for one of 12 NFTs of the car.

“Hispano Suiza has always been a brand ahead of its time, and always at the forefront of the latest technology,” says Sergio Martinez Campos, Hispano Suiza CEO. “Now it is also opening the option to sell Hispano Suiza Carmen through 12 NFT, unique and indivisible pieces like our vehicles, considered works of art on wheels.”

“Non-fungible tokens” are a kind of digital token that is unique and cannot be replicated. This has given many online artists the ability to mint unique pieces of art and sell them at ridiculous prices. For its NFT, Spain’s Hispano Suiza will team up with the Trillion Collection.

Read Also: This Lykan Hypersport Stunt Car From Fast And Furious Is Being Sold As An NFT

Together, the companies will create 12 unique, customizable designs of the Carmen, presumably to match the actual Carmen that you buy or have bought. The NFTs will be dropped on June 24 on the Clubhouse App with prices starting at €1.55 million ($1.88 USD).

“The Hispano Suiza Carmen collection is the perfect example of how you can offer a serious NFT collector a tangible investment opportunity,” says Carlos Cuevas, CEO of Trillion Collection. “It has the history, the legacy, and a super high-performance electric car as the NFT´s physical component.”

The technology behind NFTs has come under fire, though, for its demand on energy and consequent harm to the environment, making it an interesting choice for an EV manufacturer. Although Hispano Suiza is the first company we’ve heard of minting 12 NFTs, the Lykan HyperSport stunt car used in Fast & Furious 7. That NFT was sold along with the actual car, though, which this one appears not to be.

The Hispano Suiza Carmen is an electric hypercar that makes 1,005 hp thanks to a pair of electric motors at the rear wheels and can hit 62 mph from a standing start in less than three seconds, and go on to a top speed of 155 mph. Despite its futuristic driveline, the body takes its inspiration from classic Hispano Suizas, in particular the 1938 H6C Dubonnet Xenia that was commissioned by WWI fighter pilot Andre Dubonnet. 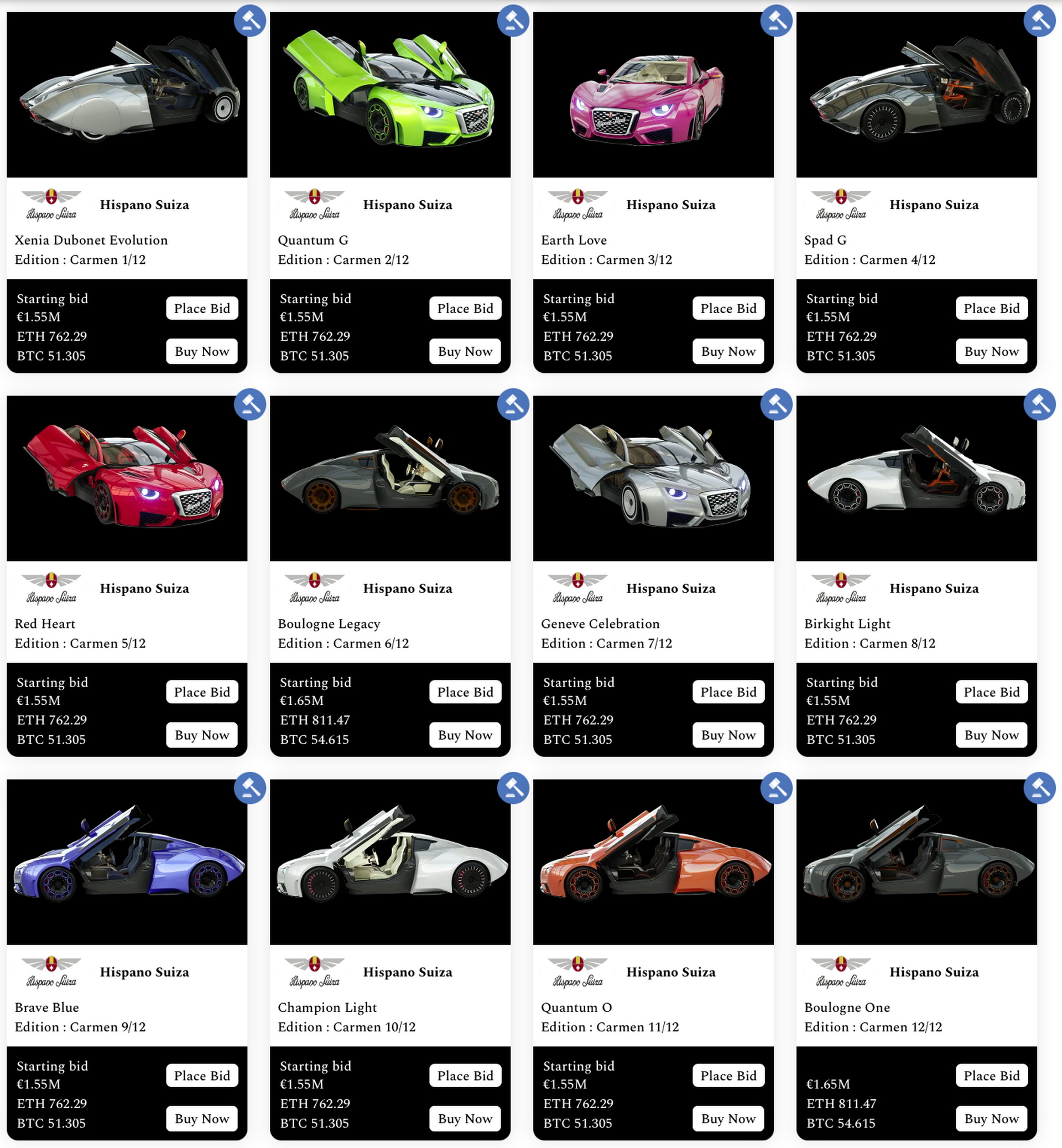